thermals in the sunshine

The last few days have, at last, seen some sunshine. The spring this year has been very late and we have had a lot of rain. From the depths of a long winter we have gone straight to high summer heat with April temperatures being broken. However, my studio has its own version of air con - it is a concrete building that never warms up- and I still have my padded shirt on. I have been doing a lot of finishing stuff, plinths mostly, for the 'Hampstead Art Fair' and 'Testing 1,2,3.....' The paint has dried really quickly in the sunshine and I am wearing my padded shirt indoors.

Apparently, not ready for my close up

I didn't get much work done today. The studios are on a dead end road so there isn't much traffic (apart from the fab taxi garage next door), but I found loads of people milling around right outside my studio, camera tracks and umpteen cameras, chaps waving sound recording poles, make up artistes, chaps in suits who were being filmed having a spat, 'take 17' operators, drivers moving the car back and forth, people saying hush and others saying 'action'. I have no idea what all the rest were up to. It was just as well I didn't need to leave in the middle of it all but they did ask I didn't use the chainsaw. I saw them again today filming at the bottom of the flats in the background and with the title 'The Corrupted' and toughie mean looking chaps (who are good to their mother but scowl a lot) I suspect a gritty East End mob film coming. 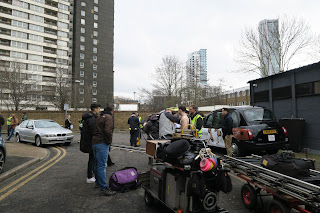 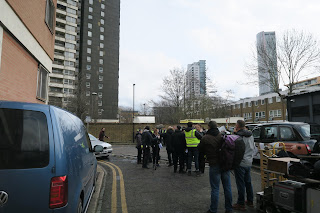 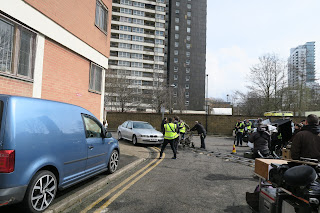